BLUE GRABBING AMIDST THE APPLICATION OF BLUE ECONOMY

THE CASE OF INDONESIA

Over the past decades, the roles of the ocean have become more crucial. Apart from its increasingly environmental roles, the ocean has been a new global economic frontier. This makes international communities have introduced blue economy, as a new paradigm that integrates the principles of social inclusion, environmental sustainability, and economic growth, to steward the ocean. Nonetheless, the ocean is also threatened by the practices of blue grabbing. This paper aims to investigate to what extend the practices of blue grabbing form a barrier to the application of blue economy in Indonesia. Moreover, this paper aims to discuss the policy implication of this issue. It is revealed that in the case of Indonesia, blue economy has preceded to a better design of policies in governing the ocean. Yet, a threat in the form of blue grabbing, which is mostly disguised by the narratives of providing incentives for investment and recovering the environmental destruction, still exists in this country. Policy implications of this issue, therefore, include engaging more small actors into policy-making processes, preparing job transition for those impacted by marine and coastal development plans, and mainstreaming population policy into the blue economy. 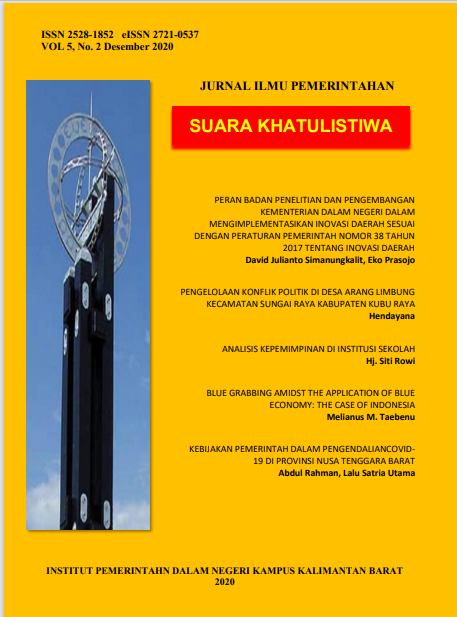