Tax which can influencea country’s economy and society’s prosperity, namely through increasing health and revenue objectives (UN 2018 p. 40), such as tobacco tax. In Indonesia, the revenue from tobacco tax had been increasing from 2007 to 2018. This paper argues that Indonesia should tax the informal tobacco firms based several strategies. The contributors of Indonesian illicit cigarettes are 90 percent from domestic industries and 10 percent from oversea industries. The possible factors which cause the illicit cigarettes are Indonesian complex tax structure and negative behaviour of cigarettes firms. To solve the issues, the Indonesian government should conduct several strategies. First, analysing cost and benefit of taxing the informal sectors. Second, after deciding to tax the informal sectors, five tax reforms policies should be implemented by the Indonesian government, namely the capability of the revenue administration, the pragmatic approach, technical approach, firms’ incentive approach, and political and administrative incentive approaches. 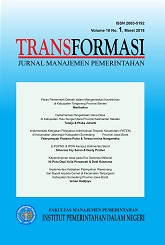