Good Governance is known as an attractive paradigm, with the principle of emphasizing the involvement of all elements, both those within the bureaucracy and those outside the bureaucracy. In the paradigm, it can be seen that there is a shift from rule government to good government, namely the process of governance is no longer solely based on aspects of regulation and legislation, but rather emphasizes the participation of all elements of society. This concept has a very significant relationship with democratization, to realize a government that is closer to its people. Regional autonomy is also a logical consequence in a unitary country like Indonesia. The implementation of public services is one of the functions of the state in order to create the welfare of the people. One form of service provided by government officials to the community is service in the field of population. KTP is one document that must be owned by everyone. This study aims to find out and describe the quality of public services in the making of KTP in the Population and Civil Registration Service in the Bandung District Government. This study uses a qualitative method with Informan through the applicant making a Identity Card (KTP) at the Department of Population and Civil Registry in the Bandung District Government. The results showed that the service of the Population and Civil Registry Service in the Regional Government of Bandung Regency was categorized as carrying out poor public services, there were still many complaints from the people in the area about the public services provided. Demand for public services that are good, easy, timely and accurate has become a principle for local governments to carry out good public services and can fulfill the main objectivies of public services, namely community welfare. 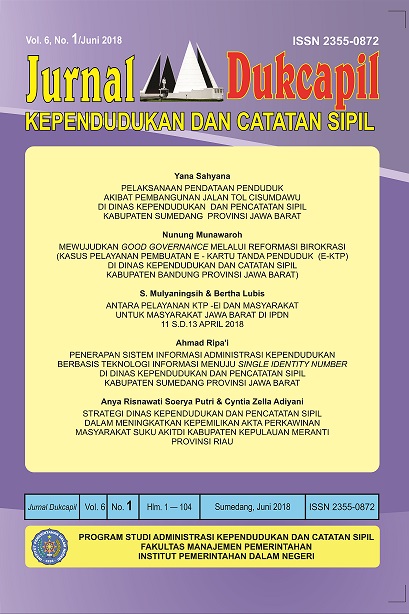