Abstract
Structuring the territory understood as a method and not a fi nal destination in the structure of
governance (local). The ultimate goal in governance or regional government is the achievement
of social welfare. Structuring the region as a method intended to bring the device to the local
community as the owner of sovereignty.
Sub-District as a working area of the district head has an important position in the public
service, because it deals directly with the public as the main consumers of public services in
question. Important essence of districts explicitly stated in Law No. 32 of 2004, which confi rmed
that the sub-district serves as the district/city.
This research uses descriptive research design analysis with a qualitative approach. This study
includes qualitative research, which produces descriptive data. Qualitative research is also
more emphasis on process rather than in terms of results, in addition to this research may
reveal a problem concerning what is in accordance with the reality on the ground.
Based on the results of research and discussion as well as the data obtained in the fi eld,
it can be concluded as follows: 1) decree No. 44 and No. 45 of 2012 issued on December
28, 2012 have not been fully implemented. The Regent of new regulations implemented in
four districts as a pilot project for the District Campaka and Cidaun representing southern
coastal areas Cianjur berkarateristik ocean regions and the mainland. While Cematan
Pacet and Middle Reef representing the Highlands and the Regional Tourism; 3) Based
on the results of questionnaires distributed researchers showed that almost 94% of the
authority delegated by declaring that have been implemented by the Head Campaka,
Cidaun, Karangtengah and Pacet despite many obstacles. 4) Based on the interview with
the Head Campaka, Cidaun, Karangtengah and Pacet and the districts mentioned that
the authority delegated in accordance with Law No. 32 of 2014 governing authority of the
Regent. But the delegation of authority was not followed denganpembiayaan suffi cient; 5)
Obstacles encountered in the implementation of devolved government affairs, among others,
the allocation of funds from the budget has been no improvement since the publication of
legislation or declaring the partial delegation of authority so that what is being implemented
by kecamaatan still in accordance with the regulations and declaring before it was issued.
Another was in the delegation of authority should be delegated the funds and personnel as
well as the completeness of facilities and infrastructure to carry out the delegated authority;
Of the conclusions that can be drawn up by the author, the author tries to give some
recommendations, among others: 1) the ineffectiveness of the role and function of districts for
is probably due to the limited authority given to districts to districts that causes districts “not
hesitate” to take action if social problems arising in the areas they work; 2) In addition, until
now there is no synchronization of activity between districts and other institutions at the district
level (vertical and horizontal); 3) Short-term: through the synchronization of activities and
make districts as an important actor in the management of these activities, the medium term:
to simplifi cation institutions where local authorities through applicable legislation activate the
role and functions of the district. Long-term: to reduce the role and function of districts to only
focus on one function, namely the function of public services. But we realize that this causes motion districts arena becomes very, very limited, while the other functions being in the arena of motion districts. 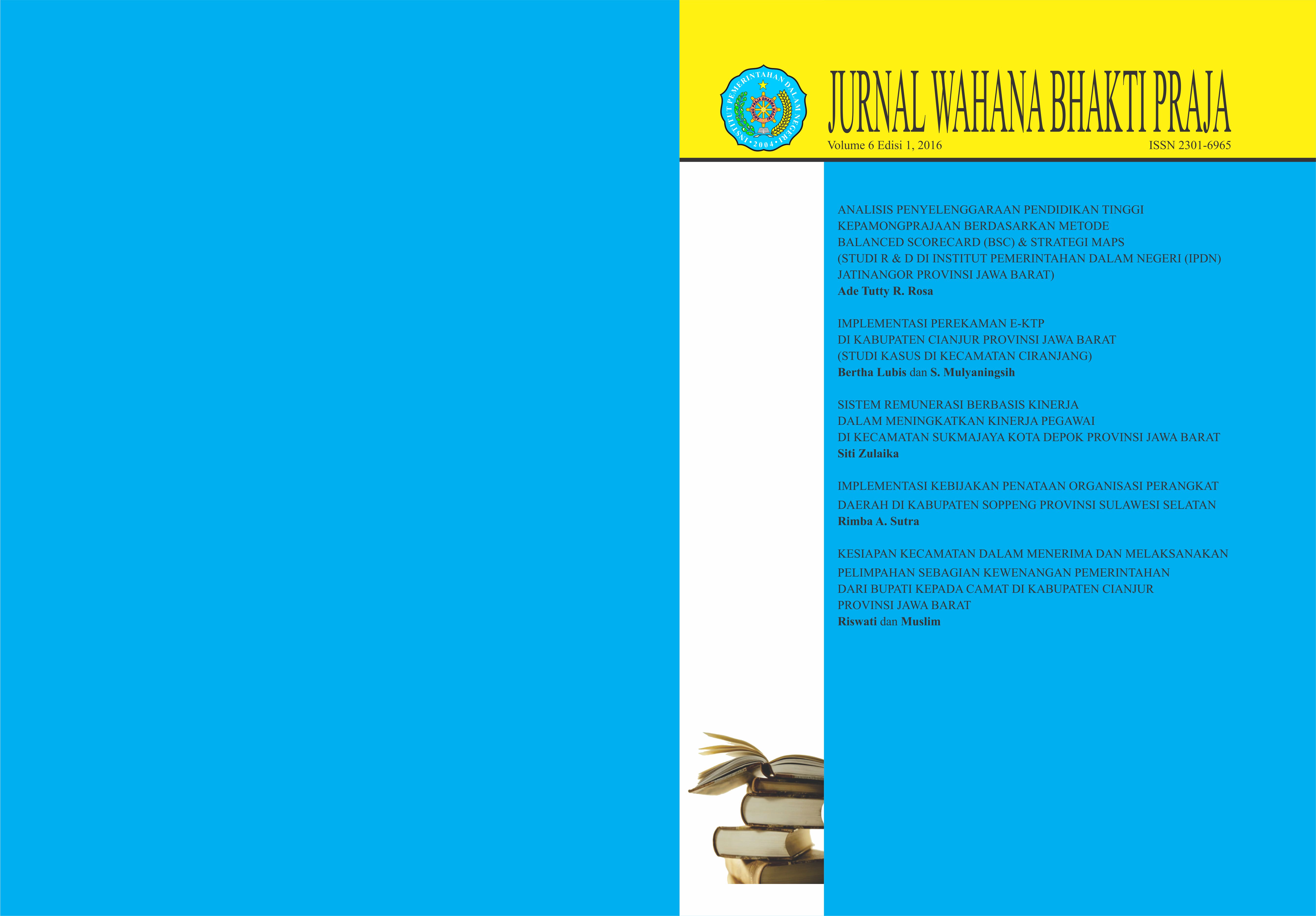