This research is a study of policy implementation that focuses on resistance to the changes in pattern of village heads general election (pilkades) policy form the conventional to the electronic way (e-voting). The study began with a demonstration against this policy conducted by a number of village heads in Sleman Regency. The e-voting system in the pilkades is not a new thing in the history of democracy in Indonesia. Some districts such as Jembrana, Boyolali, Pemalang, Musi Rawas and other regions have implemente this new pattern of elections without any significant problems especially in the form of resistance form the communit.

This study uses a qualitative descriptive method, by describing what is expressed by the informant of a phenomenon that occurs in the midst of the community in addressing such technology adoption (e-voting). Based on the results of this study found two categories of reasons for resistantion, namely : objective reasons and subjective reasons, including: (1) Objective Reasons: Not Easy, Economic Threats, Damaging Regulatory Values, and Fear of Loss of Status and POwer. (2) Subjective Reasons: Fear of Failure, Damaging Cultural Values, and Low Trust.

Those reasons are in harmony with the nine causes of resistance to change as stated by Gary A. Yukl in his book entitled “Leadership in Organization” (2010). he nine reasons for the emergence of resistance are mady by the author as a theoritical basis in studying the resistance factor of the e-voting election policy. 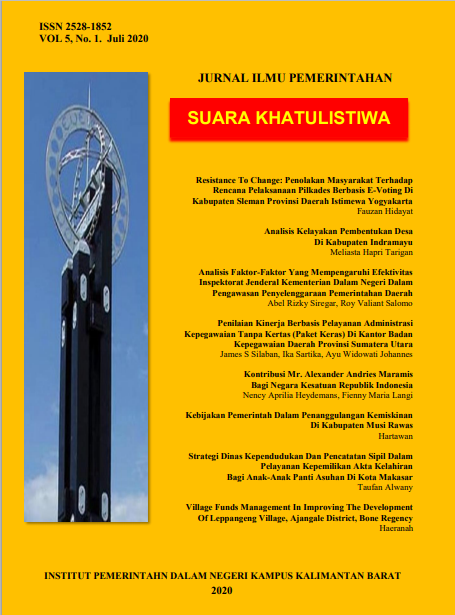