Indonesia is a country, that the largest almost 82,3 % of the area in Indonesia located in the villages in Indonesia.Based on affairs regulation number 56 2015, about code and data areas admistrasi government, it is generally known the village total about 74.754 village. So as to build village, and empower village, take the government policy which are supported the construction of the village and empowering the village community.In 2015, based on undang-undang 6 years 2014, about village, the start of government assistance financial relating to help village finance, in support of development and rural community empowerment. The hut kaharu, one village in in ciomas district attack, with the village undangundang number 6 years 2014, about village, in 2015 have received financial assistance from the government.The villages, by the government village and villagers be used, regarding the evaluation the road village infrastructure, and improving the village office, as a place to give services to villagers. So researchers interested in some the scientific journal with a title: the implementation of the management of the village perspektif the 2014 6 years, about village. This research in a qualitative deskriftip by approach inductive. Keywords: management of village fuds. 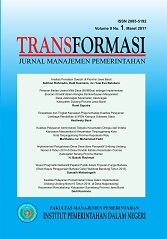